Letter From the President

Summer is upon us! The flora and fauna of the Helderbergs have burst into life. I am astounded by the sheer volume of foliage that has bloom 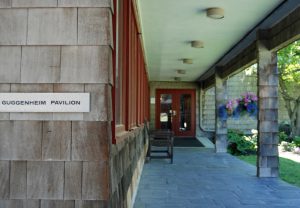 ed in our area—seemingly overnight. Birds have returned, robins are hatching, ponds and gardens are teeming, and bees abound.

Speaking of bees, the Carey Institute is buzzing with life as we prepare for the summer season. All the conference center staff have done a fabulous job preparing the buildings and grounds, all of which look immaculate in preparation for a busy summer schedule, including the return of both the Mountain Music Project in July and High Peaks Classical Music Festival in August.

In May we bade farewell to yet another group of fabulous nonfiction writers, documentarians and producers. Happily, we are already reviewing applications for our next class of nonfiction fellows for this fall. So far, we have hosted fellows from the United States, Lebanon, El Salvador, Colombia, Venezuela, Ireland, Germany and Italy covering issues including  immigration, race, poverty, justice, the environment, education, ethnic and armed conflict, the intelligence services, women peace and security, the global food system, and war crimes. They have included multiple winners and finalists of esteemed awards including the George Polk and Pulitzer Prize and a double Nobel Peace Prize nominee.

As we continue to build on our program activities, I am delighted to announce two key additions to our program staff team:

Tom Jennings has joined the team to lead the Nonfiction Program. Tom, a documentary filmmaker has been producing films for PBS Frontline since 2009. He has won a George Polk Award, two National Emmy Awards, the Overseas Press Club Award, the Edward R Murrow Award and three Writers Guild of America Awards.

Dr. Diana Woolis has joined the Carey Institute to lead our education initiatives. Diana is the creator and lead designer of the first and only platform for applied reflective practice for professional learning, Double Loop. The platform was created with, and for, faculty. She recently co-authored “Taking College Teaching Seriously, Pedagogy Matters! Fostering Student Success Through Faculty-Centered Practice Improvement” (2015). Diana has served in education leadership positions at the city, state, and national levels, where much of her work has focused on issues of access and equity.

I look forward to working with both Tom and Diana as we continue with our mission to contribute to a strong, educated and just society. It’s going to be a busy summer!