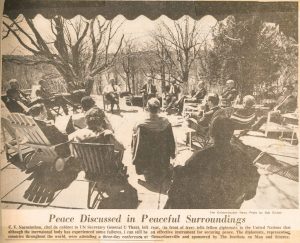 The Carey Institute for Global Good was established in 2012 when international businessman Wm. Polk Carey purchased the campus with the goal “to bring together innovative and dynamic people from around the world to seek creative solutions to the most pressing challenges of the day.”

The roots of the Carey Institute go back to 1924 when Laura Talmage Huyck convened “Country Forums on Human Relations” at her home as a reaction to the carnage of World War I. The forums aimed to promote global understanding that would lead to peaceful resolutions of differences. Students came from many countries to discuss how to achieve world peace and mutual understanding.

In 1963, Huyck’s daughter Katharine and her husband P.L. Elmore and their friends Winifred and Everett Clinchy re-established these forums when they founded The Institute on Man and Science. They donated their adjacent Huyck estates for the Institute’s 100 acre campus. Clinchy founded The National Conference of Christians and Jews and was a world leader in efforts to promote world peace. The two couples attracted a broad range of influential and world renowned thinkers to take part in Institute programs. Rensselaerville residents were invited to lectures and to discuss lecture topics with the speakers.

Over time the campus grew. New buildings for lodging, a performance hall, conference rooms and office space were constructed. The carriage house was converted and today is the “Carriage House Restaurant.” As leadership changed, the Institute’s name and mission also changed.

Bill Carey was a generous supporter of many Rensselaerville organizations. When he purchased the campus in 2012, his dream was to re-establish the original spirit of dynamic inquiry to empower people to make informed decisions that can create meaningful change in the world. He appointed Carol Ash, a Rensselaerville resident and former New York State Parks Commissioner to be its first President and to carry out its mission. In 2014, Ash transitioned to serving as Chair of the board of trustees and Gareth Crawford was appointed to be President and CEO by the board.