Visiting Brewer Session | Brewing with Mint, Chocolate and Other Ingredients 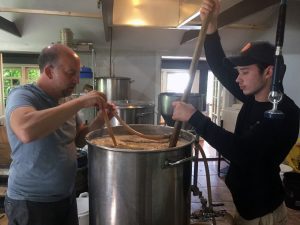 September was a busy month with two Visiting Brewer sessions hosted at the Helderberg Brewery. First, we worked with John Heiser and Garrett Asplaugh. John is a returning Visiting Brewer, and Garrett, a friend of John’s, is a cellarman at Newport Craft Brewing in Rhode Island. Garrett acquired a 55-gallon whiskey barrel and he and John had a vision to brew a barrel-aged bourbon stout using John’s hops and some NYS grains. “We knew it would be too much for our home-brew systems so we thought this would be a good project to undertake as a Visiting Brewer session.”

The brew day was fun and challenging, as this was the biggest beer ever brewed on Helderberg’s system. We had to brew a double batch to fill the barrel. The mash tun was filled to the brim with grains and water, and the finished beer will be over 10% ABV. To achieve such a big beer, of course the grain bill was massive. Malt provides the backbone to beer, as it supplies the fermentable sugars that yeast will convert into alcohol during fermentation. We used a hefty amount of dark grains in the recipe, including chocolate rye, dark chocolate and dark crystal malts. Although not a “hoppy” beer, there are a lot of hops in the recipe to balance the malt sweetness. John supplied his own Chinook and Nugget, and we contributed Willamette.  We hope to release it in early December for the holiday season. 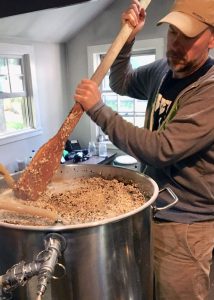 John is a small-scale commercial hop grower and homebrewer of 10 years. He aspires to get into the brewing industry in some capacity down the road. His current day job is Director of Creative Services at Hudson Valley Community College. For him, the Visiting Brewer sessions are all about hands-on experience with brewing equipment.

Second, we hosted Jesse Burt, a second-year brewing student at Schenectady County Community College. “I have been enjoying craft beer for many years, since the early 90s, and have decided to follow my passion and make brewing a reality for myself.  The hands-on focus of the Visiting Brewing Program will give me more confidence in putting the whole brewing process together, from recipe development to finished product.”

Jesse developed a Saison recipe featuring Kentucky Colonel mint and fresh hops.  Jesse originally got the hop plants from Jeff Stannard of Starter Hops in Schaghticoke at a beer dinner at WestWind Ag two years ago and has been growing it at home since then. 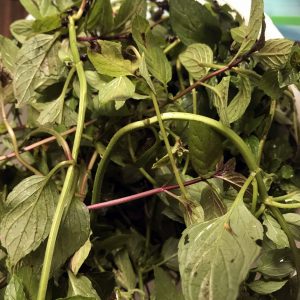 Mint was also featured in Jesse’s second batch—a Chocolate Mint Stout. The timing of the brew day was perfect, as I had just received some new specialty malts from NY Craft Malts, in Batavia, NY. Chocolate Wheat and Rye, as well as Wicked Dark Wheat and Crystal 60 rounded out the grain bill. At the end of the boil, ¾ pound of chocolate mint was added to the kettle. Boy, it smelled like a Girl Scout Thin Mint cookie in the brewery! Farmer Walt Mint Saison is on tap now at our taproom and we expect to release the Chocolate Mint Stout in late October.

Designed for startup or established brewers, the Visiting Brewer Program is an opportunity to gain hands-on experience or develop recipes using with New York State ingredients in a small-scale commercial setting and share the results with our patrons and the larger brewing community. It’s free to participate. To apply, fill out this form and someone will be in touch. For more information contact Rebecca at 518.797.5100 or rplatel@careysintitute.org.