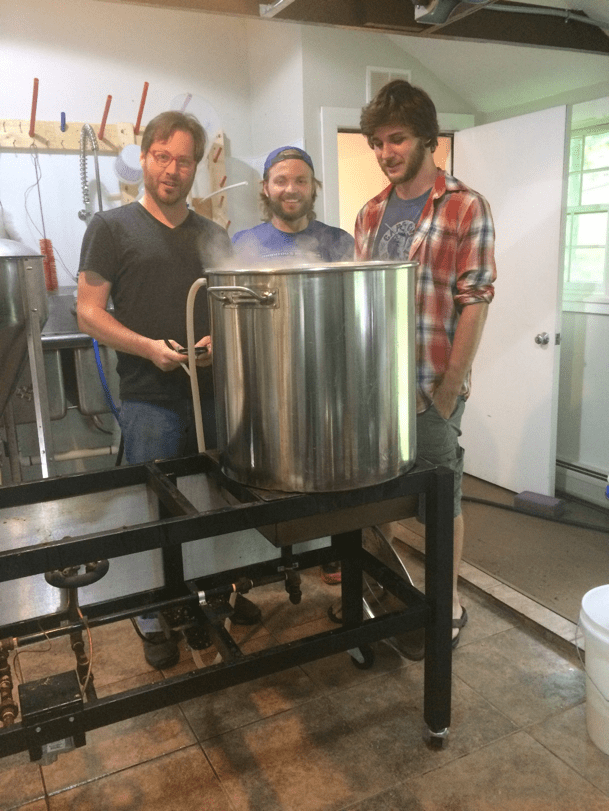 In July Justin Sturges of Captain Lawrence Brewing Co, in Elmsford, NY spent a long weekend at Carey Institute’s Helderberg Brewery as part of our visiting brewer series. As the experimental brewer at Captain Lawrence, Justin is well-attuned to working with new raw materials and developing unique recipes for the brewery’s small batch line. However, he doesn’t often get the chance to use 100% New York State grown ingredients.

The goal of the brew session was for Justin to get a good look at the quality of the New York hops and grains the Helderberg Brewery has on hand, and to make a well-hopped pale ale that would have a powerful citrusy aroma. “We started off first thing in the morning tasting and analyzing the malt and performing some hop sensory tests, including making ‘hop tea’ which allowed me to get a better idea of what the hops would smell like [in the finished product],” said Sturges.

“Justin didn’t have a fully developed recipe when we started. He put it together as we tasted ingredients. I’ve never done that before so it was a great learning experience for me,” said Helderberg’s own brewer, Chris Chromczak.

The visiting brewer series is a part of the Carey Institute’s Craft Beverage Incubator. We use Helderberg Brewery’s nano-scale brewing system and honor a 100% commitment to New York State grown malt and hops in our lab for brewers to experiment with local raw materials.

Curious about the final product? Join us at the Helderberg Brewery Taproom in early September to try some!