Visiting Brewer Program brings us Potato Lager, 1857 Spirits and New Perspectives on Making the Jump to “60% Local” in 2018 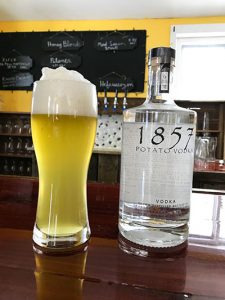 John Heiser had an idea: a potato lager made with Barber’s Farm potatoes. We had never brewed a beer with potatoes, so of course we said, “let’s do it!”

John is a homebrewer and small-scale hop grower who manages two small hop yards in Schoharie County called Heiser Hops. He first participated in our Visiting Brewer program earlier this year when he tested a SMASH IPA recipe. Shortly after, he stumbled upon the potato lager recipe and thought it would be a great opportunity to partner with 1857 Spirits (Barber’s Farm Distillery) and Helderberg Brewery to create a unique beer.

Together, John and Jamie brewed the recipe using roughly 30 pounds of potatoes from Barber’s Farm of Schoharie County, the same potatoes used in their 1857 Spirits Vodka. The result is an easy drinking, straightforward European-style lager, with no noticeable ‘potato’ taste in the final product. The Potato Lager was released last week and will be on tap now in our tasting room while supplies last. Thanks to our collaboration we are also now carrying 1857 Spirits Vodka on our liquor shelf.

As a farm brewery that is committed to strengthening New York’s farm-to-glass supply chain, we are always looking for ways to manage risk and diversify our sources of NYS ingredients, especially with the impending statutory jump to sourcing 60% NYS-grown ingredients to maintain farm-brewery status in 2019.

The potato hits the mark on a few levels. First, they are widely available. New York State is the 13thlargest producer of potatoes nationally, with over 20,000 acres in potato production. Second, aside from washing and dicing, raw potatoes require minimal processing for use in brewing. If the farm brewer can find a way to cut the potatoes, this is another direct farmer-to-brewer market opportunity.

The real test is price and efficiency. Currently, we pay around $1.00 per pound for NYS-grown 2-row base malt. For $16.00 we can get a 50-pound bag of grade-A potatoes from Schoharie Valley Farms—that’s $.36 per pound. Slightly cheaper at $.24 per pound are smaller, grade-B potatoes. Because raw potatoes are mostly water, it takes about five pounds potatoes to achieve the same gravity provided by one pound of 2-row pale malt. At $1.20 to $1.80 per five-pounds, potatoes are not exactly price competitive when compared to standard base malt, but certainly not out of range of New York specialty malts.

Brewers generally prefer barley malt above all other malt varieties and malt alternatives. But, farmbrewers need to think about more than just beer and industry standards. While the Farm Brewery Bill explicitly requires no less than 60% NYS-grown hopsby weight, the law does not specify NYS-grown malt or grain, only that no less than 60% of all other ingredientsby weight must be grown in NYS. In the event of a local malt shortage, for example, this language leaves farm brewers with room to use alternatives to meet the requirements of the law. While there is room for price discovery, the reliable potato is one way to diversify and address risk in our supply chain, build relationships with a new group of farmers, and create new and different beers that help us stand out from the crowd. 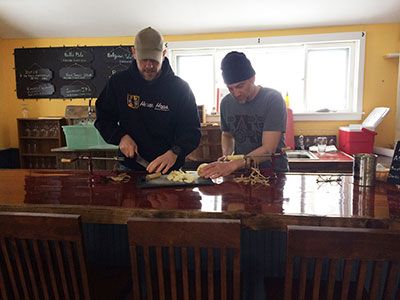 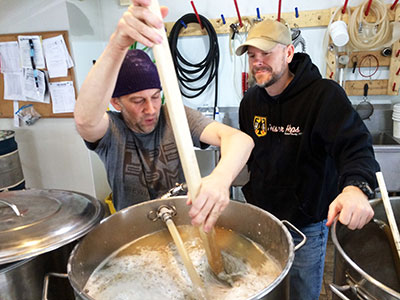