Press freedom is under attack across the globe and journalists’ safety is at risk. Physical threats, cyber bullying, psychological distress, censorship and widespread anti-press rhetoric plague journalists, preventing them from investigating and reporting the information critical to an engaged and informed citizenry. The recent high-profile murders of journalists like Jamal Khashoggi, Javier Valdez, Daphne Caruana Galizia and Lyra McKee have brought international attention to the risks investigative journalists take daily, and the world seems to be only growing more dangerous for them. 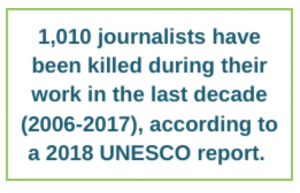 Increasing threats require new ways to address this reality. Residential fellowships for journalists at risk —like those offered by the Logan Nonfiction Program— have played an increasingly integral role in the struggle for press freedom for the past several years. Their ability to provide a safe haven for rest and respite, create long-term solidarity networks, foster continuity of creativity and provide professional development have grown increasingly recognized as highly effective ways to help journalists develop the resiliency needed to continue reporting from some of the world’s most dangerous places.

In general, resiliency refers to the ability to recover from difficult circumstances without significant sustained emotional and psychological trauma. Residential fellowships are proving to be a viable model for fostering resiliency by focusing on it as a core component of a journalist’s mission and work. By prioritizing physical safety; psycho-emotional support; community; professional engagement; meaning-making and self-awareness, fellowships are inherently good environments for journalists in need of respite while also continuing to work on their craft. The Committee to Protect Journalists has stated that of the journalists the organization has removed from threat, the vast majority of those who had access to fellowships continued to work as journalists compared to those who were extricated under different circumstances. 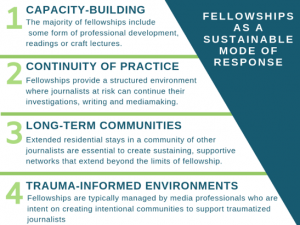 The Logan Nonfiction Program at the Carey Institute has been supporting journalists at risk through its residential fellowship since 2015. Each cohort has spaces reserved for journalists who are in danger or have experienced extreme stress or trauma as a result of their reporting. This initiative has received ongoing support from the Open Society Foundations.

To date LNP has supported six at-risk journalists, including reporters like Matthew Galizia, a data journalist from Malta, whose mother, an investigative journalist and preeminent Malta blogger, was killed by a car bomb. Galizia is just one of the talented fellows that have contributed to the success of this program. Galizia shared his experience at the Carey Institute, saying “the conversations I had here I’ve never had with any other journalists. Everyone walks away with different conclusions than they came with. That’s the point, no? That you change each other’s mind?” This is only one example of the many deserving journalists that the Carey Institute welcomes on an annual basis. We look forward to welcoming three more journalists at risk in the incoming Fall 2019 cohort.

The Carey Institute is committed to ensuring that journalists whose reporting has put them at risk have the time, space, and support to continue their ground-breaking work. Please consider supporting our campaign to deliver this critical resource for journalists. Your contribution not only enables individual journalists to continue their work but is also an integral component to supporting press freedom worldwide.

Your gift to the Logan Nonfiction Program will be matched dollar for dollar by the Jonathan Logan Family Foundation from now until December 31st.