Sustainability is an ideology at the core of the burgeoning craft beverage industry, among other thriving businesses of the 21st century. The contemporary craft brewing segment is notably active and growing rapidly, and brewers have taken up the mantle of environmental stewardship in numbers that are virtually unmatched in other major industrial and manufacturing sectors. These businesses take it upon themselves to act as strong advocates for water conservation, energy reduction, and recycling. Overall, the industry is moving in a direction of even greater activism. However, there remain some important issues that leadership from within the beverage industry could elevate to a national platform.

From where does the sense of environmental responsibility for craft brewers come? Craft beer traditionally self-identifies as a rebellion against corporate homogeneity. The vast industrial brewing conglomerate has whittled the number of consumer-recognized styles down to a paltry handful. Light adjunct lagers are still the most popular beers on the American market by far, even though the craft market’s dollar sales have been seeing growth by double digits for the last several years. Craft brewers are taking advantage of a greater demand by consumers for products that are unique and varied, with a growing segment looking for locally-sourced ingredients, as well. The numerous styles produced by craft brewers come from small variations in recipe design and ingredients, which of course lead to massive changes in finished product. The spirit of the movement is part and parcel to the materials going into the beer: heart, soul, and fresh ingredients. Many brewers, too, rightfully recognize their product as an agricultural output, necessitating a protectionist view of the Earth, its resources, and its health. The ability to differentiate between a small-batch, artisan product and one that is produced on a massive scale is rooted in a spirited defense of the environment. From this grows a brewery’s devotion to sustainable business practices.

Sierra Nevada Brewing Company, headquartered in Chico, California, is a leader among larger breweries for environmental friendly business practices. They are certainly one of the largest companies in the country with such a strong green record. The brand’s philosophy emphasizes their commitment to water co 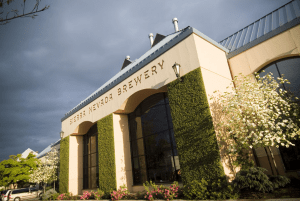 nservation, resource recovery, and energy reduction, among a host of other critically important environmental measures. Sierra Nevada’s new North Carolina brewing facility is LEED-certified platinum, and is the first production brewery in the world to meet the stringent conservation guidelines required for such certification. The brewery proudly boasts solar panels, water and resource recovery, and is even able to divert the vast majority of waste produced from landfills. Sierra Nevada also serves on the Brewery Association’s subcommittee for sustainability, a platform that allows them to increase sustainable engagement among many other breweries across the country.

Sierra Nevada certainly isn’t alone among breweries with national distribution, either. Oskar Blues Brewing, headquartered in Colorado, has also been a pioneer in the craft beer community. The brewery has been instrumental in popularizing the use of cans as a vessel for craft beer. The company’s environmentalist roots and green business ethos led them down the path to canning as a more sustainable packaging product. However, consumers were skeptical, believing that canning beer could lead to off flavors and leaching of dangerous compounds into the beer. This early pushback did not deter the company, however. They maintained that modern canning technology rendered these concerns moot.

Now, more than a decade later, cans are the most popular form of packaging for many brewers and beer drinkers. Cans are easier to recycle, have a smaller carbon footprint in both their production and transportation, and they can easily accompany a hiker or camper without the fear of bottle breakage and waste. The popularity of cans has in turn led Oskar Blues to invest more dollars in their canning infrastructure. And the freshest beers a popular brewery has to offer are now very proudly canned.

We at the Carey Institute for Global Good applaud and look up to breweries such as Sierra Nevada for their efforts in environmental sustainability. Their early commitment to the cause has established a baseline for other breweries to follow; indeed, the pioneering work of both Oskar Blues and Sierra Nevada in the realm of sustainable operations has created a consumer demand for environmental activism on behalf of craft breweries. Just as these breweries saw an opportunity to build their business and defend the environment, so now do a new breed of locally-focused brewers.

However, the lessons we at the Carey Institute glean from the mission of sustainability at some of the nation’s larger craft breweries reveal a glaring omission. Breweries rely on a supply chain of inputs, notably, malted grain and hops, which are grown in regions all around the world. Raw ingredients from unique growing areas vastly impact the finished product and its desirability, much in the way that a particular vintage affects the value of wine. With increased unpredictability both in climate and in the energy markets, shortening the supply chain has become a much more important near-term goal for many industries. Craft beer, on the other hand, has been broadening its supply chain – exotic hops from New Zealand and Australia have recently come into favor, and specialty malts from Europe are in high demand, among other niche ingredient shifts. The beers produced with these raw materials are products of cutting-edge recipe design with an exceptionally devoted following.

The increased variation and creativity in the craft sector is important for its continued growth, but sustainability advocates should look closer to home for the interesting and distinguishing flavors of local ingredients. Consumer tastes are increasingly tailored more toward the individuality of a product, which is a complicated metric. Some beer drinkers may be looking for a hazy, juicy India Pale Ale. Others may be looking for the subtle malt sweetness of a Vienna Lager. Reproducing these styles with local ingredients can be difficult, if not impossible. Craft beer began as a way to fight the stale homogeneity of the beer market, however, and brewing the same style repeatedly does nothing to reinforce the rationale for craft beer diversification. Indeed, a beer’s local supply chain may go just as far to boost its marketability as the rarity factor currently propelling some beers to the top of the market. Brewers using local ingredients are trying something new, and we see an inherent reward for this up-front risk.

New York State’s craft beverage industry has been at the forefront of the movement to shift some production needs to local suppliers. Legislation has been a major impetus. The farm brewery bill, in particular, was passed with the intent of boosting the state’s agricultural sector through a close alliance with craft brewers. So far, this partnership has been fruitful, but is poised to face several severe challenges in the coming years. Upcoming constraints on supply are daunting: at the current rate of growth for farm breweries, and with the minimum ingredient input threshold rising from 20% to 60% in less than two years’ time, there will be a major increase in demand. Both agricultural and craft beverage producers must forge closer ties quickly to accommodate coming changes. The need for supply chain advocacy is growing rapidly. The same leadership that brought sustainable brewing practices such as wastewater reduction and canning is possible to solve this looming challenge. The Carey Institute’s launch of Source NY is a tool we hope will help fortify the supply chain for New York brewers using New York ingredients.

We invite brewers, farmers, and industry partners to register for Source NY and be a part of the craft brewing segment’s next evolution.