Books published by Logan Nonfiction alumni this spring will bravely dissect the Syrian War through a human lens and will provide an interior examination of the culture of American youth and masculinity in the Marine Corps.

Matt Young’s “Eat the Apple” is a memoir that follows his decision to join the Marine Corps at eighteen, shares his experience of three deployments in Iraq, and interrogates the absurdism of 21st-century war.

Publisher’s Weekly writes: “Young matches his stylistic daring with raw honesty, humor, and pathos . . . Young writes from a grunt’s perspective that has changed little since Roman legionnaires yawned through night watch on Hadrian’s Wall: endless tedium interrupted by moments of terror and hilarity, all under a strict regime of blind obedience and foolish machismo.”

“Eat the Apple” will be published by Bloomsbury on February 27. The book is available for pre-order now. 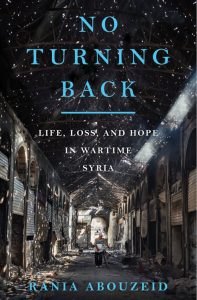 ’s “No Turning Back: Life, Loss, and Hope in Wartime Syria” is the culmination of five years of clandestine reporting on the front lines of the Syrian War. The book tells a story of hope and tragedy through the eyes of four young people searching for freedom and safety in the devastated country.

“The civil war in Syria is the most catastrophic event of our time, and the most dimly understood. Most journalists won’t go near it. Rania Abouzeid has produced a work of stunning reportage from the very heart of the conflict, daring to go to the most dangerous places in order to get the story. The result is a sensational book that allows us a deeper, and more humane, understanding of this terrible war; it’s a credit to Abouzeid’s bravery and fortitude,” says Dexter Filkins, Pulitzer-winning author of “The Forever War.”

Pre-order the book here in advance of its March 13 publication by W.W. Norton & Company.

Matt and Rania were both part of the Nonfiction Program’s inaugural class of fellows in the fall of 2015.