Introduction: What are rural-urban linkages and why should we care about them?

Albany County boasts a diverse landscape. It is home to New York State’s capital while nearly 50% of its land base is considered rural. We tend to focus on the differences between the county’s rural and urban areas — what makes us unique and what divides us. This has long been the basis of how we approach planning and development. Rural and urban areas are different and therefore divided and in need of separate treatment. An alternative to this siloed approach is to look at the ways which we are connected and disconnected. As the International Institute on Environment and Development says: “Rather than looking separately at urban and rural areas and what matters to each of them [individually], it is vital to look at the linkages between them: it is from here that lasting change will come.” (IIED, 2020)

The goal of “Country to Capital” was to learn more about rural-urban linkages in the Capital Region and to identify needs and opportunities for improved connections. The project takes a rural perspective, focusing on linkages between the rural Albany County Hilltowns and nearby urban areas, but our approach and findings offer insight into the region more generally. 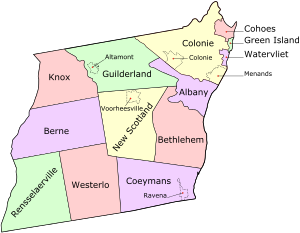 Over the next few weeks, we will share what we found and learned in a series of blog posts. This first post addresses two key questions: one, what are rural-urban (urban-rural) linkages, and two, why should we care about them?

The United Nations defines Urban-Rural Linkages as “nonlinear, diverse urban-rural interactions and linkages across space within an urban-rural continuum, including flows of people, goods, capital and information but also between sectors and activities such as agriculture, services and manufacturing. In general, they can be defined as a complex web of connections between rural and urban dimensions.” (UN Habitat, 2017)

The International Institute for Environment & Development adds that “rural-urban interactions can also include ‘rural’ activities taking place in urban centers (such as urban agriculture) and activities often classified as ‘urban’ (such as manufacturing and services) taking place in rural settlements.” (IIED, 2020) 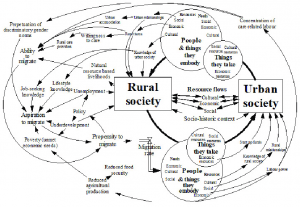 Making sense of a complex topic:

As this project progressed — specifically, as we started interviewing residents and elected officials to learn about their perspectives on rural-urban linkages — we found that these definitions were too general to help people talk about rural-urban linkages. We developed the following framework to aid our conversations:

First, linkages can occur in at least one of two realms:

Here are some examples of what this looks like in the human/built environment:

Here are some examples of this works in the natural environment:

This is not a perfect framework. Some linkages exist in both the human and natural environments, like food systems. Some components exist in multiple categories, e.g. water is both natural infrastructure and a good that we consume. The goal is not to categorize linkages into a rigid structure, but to offer a point of reference and common terminology for navigating a complex topic.

Why are Rural-Urban Linkages relevant to Albany County and the Capital Region?

First, Albany County is both rural and urban. The Hilltowns, comprised of the towns of Rensselaerville, Berne, Knox and Westerlo, are generally considered rural and the City of Albany and surrounding suburbs urban. As mentioned above, we tend to highlight our differences and what makes each area unique while overlooking the many ways in which our communities are connected as opportunities for collaboration and growth.

Second, even the Hilltowns can be classified as both rural and urban:

This duality is arguably correct. Based on population density, land use and infrastructure, we look more like a rural community. Based on employment by sector, provision of social services and our physical adjacency, we are linked to the metropolitan region. But MSAs are often used in ways they were not intended, e.g. to inform regional economic development agendas. In these cases, as a rural community included in an MSA because of certain rural-urban linkages, it is important to understand our connection to the MSA and how it impacts our communities.

Third, research suggests that rural-urban linkages is a strategy for economic development. For example, one study suggests that improving linkages between rural areas and intermediary cities, like Albany, can support more equitable development. This research counters the tendency to look to mega-cities like New York City as the pre–eminent urban market, while overlooking market opportunities in smaller urban centers.  (Siba, Eyerusalem, 2018 and UCLG, 2018)

Rural-urban linkages also benefits rural entrepreneurship, which is playing an increasingly important role in economic development.19 Through their businesses, rural entrepreneurs create ‘bridging’ social capital, or connections between different groups and linkages between their communities and nearby urban centers. Their connections and relationships to urban markets gives them insight into market opportunities outside of their local communities. This in turn can help create a more favorable rural business environment for their own and other businesses. (Besser & Miller, 2013 and Mayer, et al, 2016)

In conclusion, Rensselaerville and the Hilltowns are rural areas existing within the larger, urban Capital Region and studying the ways in which we are connected and disconnected to the urban system — not just what makes us different from it — may offer perspectives not considered before. In our next blog post, we will share what we’ve learned about rural-urban linkages in Albany County.

This article was adapted from “Needs and Opportunities for Rural-Urban Linkages in Albany County, New York” prepared by Rebecca Platel, Sustainable Communities Program Manager at the Carey Institute for Global Good, in partnership with the Town of Rensselaerville, Albany County, NY with support from the Hudson River Valley Greenway.