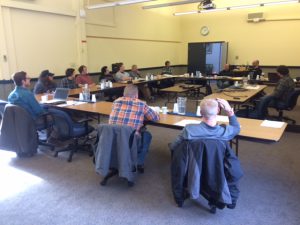 The Carey Institute for Global Good and the Helderberg Brewery Incubator hosted a Craft Beverage Roundtable on January 22, bringing together professionals in New York State’s agricultural and brewing industries.

The twelve attendees included hops growers, grain farmers and brewers from nine counties around the Capital Region and throughout New York. They represented both new and veteran professionals in the craft beverage industry, including C.H. Evans Brewing Company at the Albany Pump Station, Hop Hollar Farm based in Petersburg, Troy’s Rare Form Brewing, the newly launched Hammo’s Brewpub in Hensonville and several others.

With more than 100 farm breweries now operating in New York, 2015 was a hallmark year for the craft beverage industry in the state. Attendees agreed that the increased interest in craft brewing on behalf of both consumers and the state was a positive step for the industry at large. The increased attention has spurred growth in both hops and grains growing, though more farms, experimentation and expertise is needed.

“Farm breweries started the process of buying New York-grown ingredients and it’s really taken off,” said Kevin Mullen, owner of Rare Form Brewing Company in Troy. “There’s room to grow and we can grow quickly. There’s an incentive for any brewery—not just farm breweries—to use New York State ingredients in their beers.”

In discussing the industry outlook for 2016, attendees considered the merits of creating a distinct New York-style brew, the topic of industry saturation and growth logistics. Perennial concerns such as quality control of ingredients, small grains sourcing, setting market standards and processing hurdles were also discussed in depth.

A need for industry support of hops and small grains farmers was widely expressed. Farmers’ ability to keep up with the demand for locally grown beer ingredients that are both varied and of high quality is essential if the industry is going to succeed. As farmers and brewers work together to create a mutually supportive relationship, partnership is key.

“This is the year for collaboration,” said Ryan Demler, the head brewer at C.H. Evans. “It’s in the interest of our industry to share our information, show what we’re doing and also show where we need to improve.”

The afternoon discussion centered around Source NY, a collaborative initiative between the Carey Institute and Sourcemap intended to connect farmers, craft beverage producers and other service providers. Attendees provided feedback on the platform and discussed logistics in creating a sustainable supply chain in the Capital Region and Mohawk and Hudson Valleys.

The Helderberg Brewery Incubator is part of the Carey Institute’s Sustainable Communities program.

On March 11–13 we will host an incubator workshop in yeast management for small-scale breweries with representatives from the Culinary Institute of America, Kent Falls Brewing Co., Saranac Brewery and White Labs out of California. For more information, click here or email Greg Back at gback@careyinstitute.org.