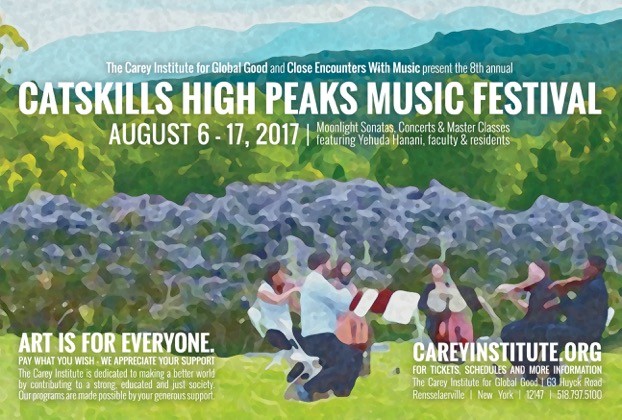 Rensselaerville, N.Y.— The Carey Institute for Global Good is proud to announce the eighth annual edition of the Catskills High Peaks Music Festival, “Fanfare for the Uncommon Woman” taking place August 6 though 17. A joint presentation of the Carey Institute and the Berkshire-based chamber music organization, Close Encounters With Music, this year’s festival features remarkable composers who stormed the barricades and revolutionized the place of women in the arts as it celebrates the 100th anniversary of women’s suffrage in New York State.

The ten-day chamber music festival and residency, directed by internationally acclaimed cellist Yehuda Hanani, offers a combination of concerts, lectures, films and master classes featuring distinguished veteran musicians sharing the stage with 50 outstanding young performers from around the world. Hanani brings together an all-star cast of classical music masters including violinists Peter Zazofsky and Irinia Miresanu, violist Michael Strauss and pianist Michael Chertock. Throughout the festival and residency, historic, forgotten and new works by women composers will be presented alongside major works by Bach, Schumann and Brahms.

“The societal obstacles to acquiring the vote reflect the same barriers and cultural biases that women had to overcome to have their works published and performed,” said Hanani. “Since many of the key figures and pivotal events of the suffrage movement took place around the Hudson Valley, we believe this is a fitting time and place to bring attention to the creative achievements of women composers.”

The festival will feature a series of performances by talented emerging musicians that offer audiences a unique sneak peek of the classical music world’s future stars. A series of illuminating talks as well as free classes and workshops will be offered. This year’s festival will also include a “Buddy Day” concert in which approximately 25 students from Albany’s Empire State Youth Orchestra, Kids4Harmony in Pittsfield and CHIMES of Albany will participate in a day of one-on-one mentoring and performance with the residents and masters.

As part of its Art Is For Everyone initiative, the Carey Institute offers all festival events happening on its campus on a Pay What You Wish basis. In a time when investment in arts education is falling and rural isolation is becoming more pronounced, the Carey Institute values the Catskills High Peaks Music Festival as an important bridge that strengthens its surrounding community.

“Our founder Bill Carey loved our community, and made it a personal mission to invest in its enhancement and the creation of opportunities for its young people. The High Peaks Festival brings world class musicians to our back yard in a way that no other program does,” said Carol Ash, chair of the Carey Institute’s board of trustees. “We hope everyone will take advantage of this opportunity, bring their families, and make a contribution—however small or large—to help sustain this unique experience for the future.”

Notably, in June, the Carey Institute received a pledge from an anonymous supporter to match up to $10,000 in donations raised for the High Peaks Festival. The challenge takes place between now and Sunday, August 13. All donations received, including Pay What You Wish contributions to reserve seats for festival events, are eligible for the matching challenge. For a full list of events and to reserve your seats, visit https://careyinstitute.org/event/catksill-high-peaks-music-festival/ or call (518) 797-5100.

The Carey Institute for Global Good is a not-for-profit organization founded in 2012 by Wm. P. Carey and is dedicated to making the world better by contributing to a strong, educated and just society. Through its programs, the Institute strives to bring together innovative and dynamic people from around the world to seek creative solutions to the most pressing challenges of the day. careyinstitute.org

Close Encounters With Music (CEWM), the Berkshire-based chamber music organization, founded the High Peaks Music Residency as an educational initiative to infuse students with love and enthusiasm for their musical vocation, instill a spirit of musical adventure and discovery, and imbue an appreciation for past traditions.