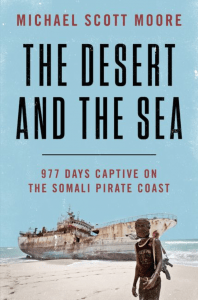 Join us for an evening with Michael Scott Moore, author of “Sweetness and Blood” and “The Desert and the Sea” as he recounts his three-year captivity by Somali pirates. Moore examines the intricacies of foreign policy, religious extremism and the costs of survival.

In January 2012 Moore traveled to the Horn of Africa to write about piracy and ways to end it. In a terrible twist of fate, Moore himself was kidnapped and subsequently held captive by Somali pirates for 977 days.

Michael Scott Moore was a 2017 Logan Nonfiction Fellow at the Carey Institute, where he finished his book “The Desert and the Sea” a story that lives at the intersection of reportage, memoir and history. Caught between Muslim pirates, the looming threat of Al-Shabaab, and the rise of ISIS, Moore observes the worlds that surrounded him—the economics and history of piracy; the effects of post-colonialism; the politics of hostage negotiation and ransom; while also conjuring the various faces of Islam—and places his ordeal in the context of the larger political and historical issues.

Michael has appeared on Comedy Central’s The Daily Show with Trevor Noah, The Joe Rogan Experience and TEDx Talks.