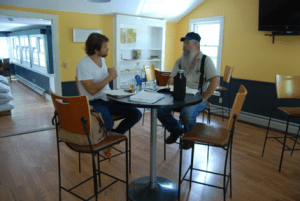 On Sunday August 7th the Helderberg Brewery Incubator hosted its first participant. Damian Wolos joined us for two days to learn about the brewing process and beer recipe development. Wolos, a Mexican native, recently relocated to New York City from London. His vision is to brew a fresher version of imported Mexican style lagers by using New York State ingredients. 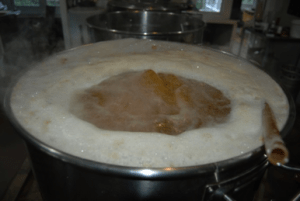 Helderberg Brewery brewer Greg Hostash worked with Wolos to develop and brew two different batches of beer using NYS ingredients. As a farm brewery, Hostash is required to use at least 20 percent of hops and grain by weight in all of the beers he makes. As a small brewery we are able to use almost exclusively NYS i 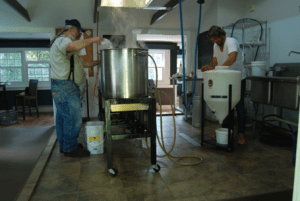 The resulting beers contain 100 percent NYS grain grown by Migliorelli Farms in Tivoli, NY and malted by Dennis Nesel at Germantown Beer Farm. The hops were sourced from Hudson Valley Hops; imported German hops were also used in one batch to compare differences in flavor. Stay tuned to our website and the Helderberg Brewery Facebook page for information about the release of these two beers in late September.

To learn more about brewing opportunities at the Helderberg Brewery Incubator, contact Greg Back at gback@careyinstitute.org, or call 518-797-5100.