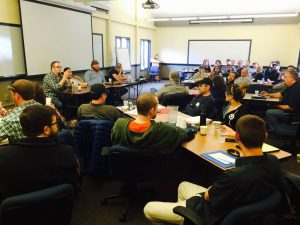 The weekend-long event featured intensive sessions on yeast handling and care; an introduction to the nuance and wild nature of microflora; intermediate lab work, including cell counts and pitching science; and an open panel discussion. 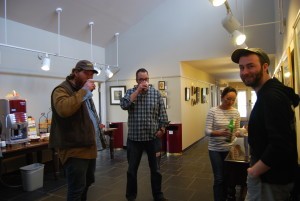 Throughout the weekend, presenters fielded general questions about best practices and brewery operations, as well as more specific questions about bottle conditioning, troubleshooting, microbial activity, as well as yeast health and longevity.
Panelists encouraged brewers to work hard in understanding the science of fermentation and to develop a working knowledge of yeast health and how selecting specific strains can influence both the type of beer they can make and the consumer’s perception of their product. Cultivating a house flavor through yeast selection is not only an issue of taste preference but also of brewery branding.

“You have to create the beer you want and mold the identity of the brewery you want,” said Hutch Kugeman. “Know your yeast strain and know what it does …. The flavor of beer is a living thing.” 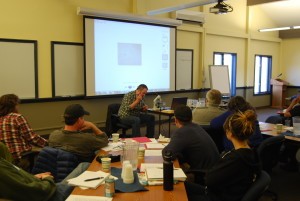 Neva Parker’s clinical yeast expertise was nicely contrasted with Evan Watson’s wild yeast practices, providing attendees with both the scientific know-how and the ingenuity to attempt bold new fermentations. Yeast impacts the finished product of beer more than any other ingredient and, though it is widely overlooked in favor of hops, yeast education is essential to brewing consistent, quality beer.

“Without yeast there would be no alcohol. It’s what transforms sugar water into beer,” said Derek Dellinger. “Workshops like this are crucial because it helps brewers take their beer from a poorly fermented product into an interesting, complex, well-made beverage.” In addition to working as the head brewer at Kent Falls, Dellinger has a forthcoming book about his year of eating solely fermented foods called “The Fermented Man.”

Audience members expressed concern over the appropriation of New York State-made raw resources like hops and grains—especially as purchasing requirements for farm breweries increase to 90 percent local ingredients by 2024.

Brewers also discussed whether or not New York State and the nation at large is experiencing craft beer saturation—a topic of perennial interest among beverage producers, consumers, and critics alike. Thankfully, most brewers in the room agreed that there is plenty of room to grow and plenty more craft beer to be had in New York State.