Local hop grower John Heiser returned to Helderberg Brewery in mid-March to brew a lager using potatoes from Barber’s Farm in Schoharie County. John’s small-scale hop yard is near Barber’s and his connection to the farm inspired his interest in brewing with potatoes. A homebrewer of 10 years, he aspires to get into the brewing industry in some capacity down the road, whether working for someone else or perhaps starting his own brewery. He participated in the Visiting Brewer Series last year and got a feel for our brewing equipment; this year, he wanted to take the lead in the process and get more hands-on experience. Read John’s summary of the brew day, below.

“Like last year’s Visiting Brewer Session, Jamie and I brewed a potato lager. We used potatoes from Barber’s Farm again. The variety is a secret, but it is the same potato they use to distill their 1857 brand vodka. This year we changed the potato adjunct a little by having Barber’s masticate the whole potatoes before brewing, as opposed to last year, when we peeled and chopped them into slices by hand. I was curious to see if the peels would add any different flavor composition and/or additional mineral content that might change the beer. Also, I suspected the masticated potatoes might release more sugars into the wort than the chopped potatoes. If memory serves, I believe the initial hydrometer readings tests did indicate a slightly higher sugar content than last year.”

Results & Discussion: The final beer is a 5.5% ABV medium-bodied lager. Leaving on the skin, and and macerating instead of cutting the potatoes seems to have made slight, favorable differences from last year, including the higher ABV. Additionally, this year we had better control of fermentation temperature and used a higher-quality yeast, which produced a cleaner, more lager-like beer.

About the Visiting Brewer Series: Helderberg Brewery is a NYS Farm Brewery located at the Carey Institute for Global Good. An initiative of the Institute’s Sustainable Communities Program, the brewery offers workshops and networking opportunities to promote farmer-brewer connectivity. Through the Visiting Brewer Series, we open up our brewery to aspiring and established brewers who want to gain more hands-on experience or experiment with ingredients. 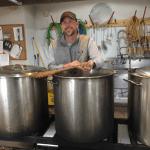 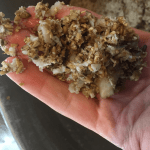 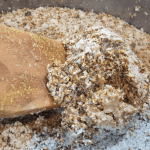 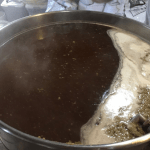