We got to catch up with Nate Stempel last month at Helderberg Brewery. Nate is originally from nearby Berne, N.Y., a Berne-Knox-Westerlo Alum, and visits regularly to tend to his hop yard on his family’s land. Nate graduated this spring from MIT’s Master’s of Logistics and Supply Chain Engineering program. We spoke about his thesis project: evaluating the supply base of hops for the growing craft brewing marketplace in New York State—a topic that is close to our hearts. 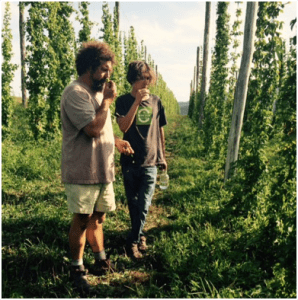 Why did you choose this topic as the focus of you master’s thesis? A lot is unknown about the Farm Brewery Legislation—the short-term and long-term realities of being a hop grower or a farm brewer. More information is needed. Being a new hop grower myself, I was in a unique position to contribute knowledge to the sector.

Describe your research process. My research utilized several models to analyze growth patterns and interactions of various actors in the sector—the system dynamics of the farm brewing sector. First, I used a BASS diffusion model to forecast the possible number of breweries NYS will see over a long time horizon. Second, I looked at clustering trends, identifying which locations across the state are becoming epicenters of activity. These clusters tend to enable collaborative resource sharing, which helps reinforce and buttress growth. Last, I looked at different types of platforms to make resource sharing and collaboration easier.

What were your key findings? What was the most interesting or surprising thing you learned? The hop balance. Based on my survey of farm brewers and hop growers, I found that New York State has a surplus; current production can meet all farm breweries’ demands.  This was surprising since I went into my research with the impression that the number of breweries were growing far quicker than the number of hop yards.

I was also intrigued to learn more about the impact of the Farm Brewery Bill and other subsequent craft beverage bills. The craft beer sector was already expanding before the farm brewery bill was introduced, thus, it’s not entirely true to say that the farm brewery bill spurred the new wave of growth; that had already started. But, when compared to other states, like Massachusetts and Maryland, which also introduced similar legislation around the same time, New York State has seen the highest growth in breweries per capita and tied this growth together with growth in the hop farming industry.

What messages do you want hop growers to get out of your research? Pay attention to what’s happening around you and recognize the advantages or disadvantages of your location in relation to other growers and processors. Don’t be afraid to work together. When people get together to share resources, tacit knowledge exchange occurs, which improves everyone’s operation. Collaborative resources sharing also makes scaling up more affordable, something that will be critical for long-term survival of the NYS hops farmers.

Also, take some time to understand the implications of the Craft New York Act (Passed in 2014 after the Farm Brewery Bill) and consider your commitment to New York State farmers. The farm brewery license was attractive in part because of the retail sales allowance. The Craft New York Act extended this right to all New York State breweries, eliminating the competitive advantage for farm breweries. This makes justifying a higher priced NY grown hop harder for most breweries.

How do you think this will impact the farm brewing sector? As brewers see the Farm Brewery License’s appeal diminish they will change licenses to regular microbreweries.  It’s unfortunate. Being a farm brewery should have a real incentive and the advantages should be strong, otherwise you’re not really changing anything and the relationship created with local hop farming in NY will fade. The farmers who are investing in this industry based on an assumption of this guaranteed market will find themselves competing with hops and grain growers in the Pacific Northwest and mid-west.

What strategies for long-term survival would you pass along to growers?

How does consumer taste factor in? Consumer taste is critical. IPAs are no longer the exception but the expectation. They can be expensive to make because they require more hops, a challenge for a small brewery sourcing local hops at a higher price. And, the hop varieties needed for an IPA tend to be hard to grow in New York State, if not proprietary varietals. Wine makers are limited by the type of grapes that grow well in their region, but it’s not seen as a limitation, it’s called ‘terrior.’ Hopefully we can help consumers become more knowledge and interested in other beer styles that reflect what grows well in New York State. Ultimately a brewer is going to produce what sells. And if the Farm Brewery Act begins to be prohibitive on certain beer styles based on lack of ingredients it will be another factor that pushes Farm Breweries into the generic microbrewery license category and again diminished the opportunity for NYS hop farmers.

How has your research influenced your own hop yard? As I am expanding I have a very different strategic method for choosing varietals to invest in.  To be resilient to legislation changes and market dynamics I am collaborating with local brewers to see what unique varietals they are interested in.  Cascade has been a top seller, but the industry needs to find out what else grows well here and plant a broad scope of varietals. This will help in the long term for the industry as a whole. I am also planning the scale of my operation assuming I’m not going to get $17 per pound forever; building collaborative relationships before they are needed will be critical to ensure future viability.